Easy Curves by Nick Baroni was published circa 1950 by Curtis Warren Ltd.; it begins on page 3 and concludes on 128. The front cover illustration is by H. W. Perl, appearing to be one of his customary painted (colorized) photos of a model or actress. Sadly, my copy is in complete ruin: the front cover is severely ripped and torn. A chunk of the lower cover along the spine is missing. However, these are incredibly difficult to obtain, so I won’t complain.

The novel was one of many penned by Albert Edward Garrett (born 1917) since the 1940s, a career that spanned a few decades.

He frequently under the alias “Edgar Garrett,” this appearing first on “Headline Holiday” (John Crowther, 1944) and later resuscitated for his Western novels of the 1950s and 1960s.

For the mushroom publishers, he wrote under a slew of identified books, and no doubt, many more yet to be confirmed. Below are two examples of his crime titles:

It’s not the focus of this article, however, to delve into this author’s literary career, for which there are many other sites already admirably suited, so let’s return to Easy Curves for a moment. This novel embraces all that is hard-boiled and sleaze. Loads of violence, bloodshed, tons of unscrupulous sex and rapes, etc.

Gangster boss Joey Grindle and his boys are in a tight spot straight into the novel. A rival gang has moved in and are blissfully mowing down their competition. Joey is a survivor, and while convincing a couple of his boys to give up and head out front, he blasts his way out the back and escapes. Joey captures a rival gangster and beats the hell out of him to learn who squealed. When he learns that his younger brother’s “steady” spilled the beans, he busts in his brother and the girl. Relating the misadventures and the extinction of the Grindle gang, his brother is nonplussed and quickly angered to find that his girl sold them out. Trying to worm her way out of death, she attempts to seduce Joey, during an act of misinterpreting him. He catapults her into another world with a single shot through the heart.

Brothers Joey and Eddie take it on the lam and lay low for several weeks. Instructing Eddie to avoid female attachments in future, they hook up with one-night-stands to sate their urges. Joey, however, becomes infatuated with a girl that gives him the works and dumps him the next day. He doesn’t mind doing that to any girl, but no girl is gonna give him the one-night treatment. Possessed, he stalks her, but lands one of her friends, instead. They hook up and while on a drive to a cottage, they are intercepted by her aged wealthy husband and his hired hoodlums. They beat the living tar out of Joey and leave him for dead on a tombstone with a cement angel looking down on him, wings spread.

Something in him has cracked, severely. Mentally unstable, he is tended by a mob doctor and nursed back to health. But he doesn’t wait long to drag Eddie and some fresh cohorts into an assignment to kill everyone at the mansion that beat him to death. The doll-baby is happy that they are all dead and she is free. Convincing her to stay away from him until the news dies down, she plays her part admirably to the newshounds and law.

Time passes, they hook up, take a drive, and another group of hoods pull them over. Beaten severely and captured, he awakens to find his girlfriend on a bed and raped by a man he let take the rap for him years earlier. He had escaped prison and was hunting Joey the entire time. Having located Joey earlier in the novel, he followed him to the mansion and realized there was the opportunity for a monetary rake-off, a la bribery. He convinces an apish ogre to join his ranks, and others. After raping the girl, the ape is given his turn. Rapidly unhinging, Joey struggles free, grabs a gun, and shoots her dead. The ape dims is lights quickly.

He reawakens in a basement, bound and chained to a wall, battered and beaten to death. His brother and help break him out, but it’s clear to all present that his mental stability is rapidly waning. He’s dangerously close to losing touch with reality.

Fearing that everyone is out to get him, Joey begins a one-man war against his own gang, thinking that they are taking over the gang. He kills everyone, often mistaking his guards as long-dead rival gang members. In the final scene, he has it out with his brother Eddie, and top lieutenant, whom he is certain intends to take over the gang. Eddie, realizing that Joey is indeed too far gone, pulls his gun. The lieutenant pulls his and shoots the gun out of Eddie’s hand (he’s still loyal after all) and Joey shoots him.

Joey, not wounded, last man standing, gloats, and while Eddie is slowly bleeding out to death, the lieutenant, shot himself a couple fatal times, shoot Joey dead, realizing many innocent parties will continue to die if he doesn’t. He is the last to eventually die in that office, with the final thought that none of this should ever have happened…. 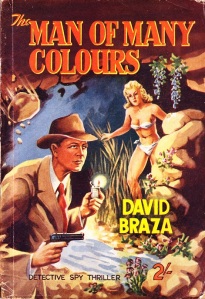