Some Take a Lover reportedly debuted in 1933 via hardcover publisher The Macaulay Company (New York) is a fairly scarce sex novel about “free love” among a wealthy elite family and its many consequences. The Library of Congress records the publication date as 3 January 1933, which to me indicates it likely appeared late 1932 during the Christmas season. Who knows!

Ann Du Pre is the alias of Grace Lumpkin. Who is she? Well, online data suggests that she was a Communist and a believer in the concept of free love, even among married couples. This novel comes on the heels of The Roaring Twenties and the collapse of the stock market leading into The Great Depression. Communism was on the rise during the 1930s, especially within the artistic and literary circles. I don’t personally know much about the author but gleaned some from Wikipedia (never an authoritative source, mind you) but mostly I looked into historically digitized archives from her era.

The edition I am reading was published by The National Publishing Company (Toronto, Canada) in 1946, in paperback format. The cover states that it is A Superior Publication while inside states as published by the Duchess Printing and Publishing Co. Limited”. The blurb (below) is from inside the paperback edition.

This novel centers around the ultra-wealthy elite Singleton family. The aged matriarch is bed-ridden and given to frequently rewriting her Will. The entire family has been called to the Singleton estate and each has their own room(s). I give this the plural because there are also children present.

The main protagonist is the seemingly timid granddaughter, Natalie. She’s in love with an artist (Paul). They are not married and technically living in sin. The entire black sheep family (ay, that’s the entire lot) judges her in a wide variety of malicious ways. They however have their own faults: cheating husbands, they themselves are having affairs, gambling issues, you name it, and it is all there. Yet they defend their actions as acceptable while Natalie is the scandalous one.

The only person she feels close to is her cousin Katherine, who freely admits in the opening pages the only reason Grandmother tolerates her is because Katherine is her official bootlegger.

Natalie is given a private audience with her grandmother who does not approve of Natalie and requests that she obtain a dictionary and read to her the definitions of 3 words. The words chosen are to describe Natalie, only, Grandmother Singleton isn’t sure how best to describe her, and informs Natalie that she is to make the ultimate decision. The words?

See, Grandmother Singleton has maintained a book with index cards detailing each relative and their marital partner along with an un-nice word or more about each person. It’s an ugly job that Grandmother requests of Natalie. Take the book, show it to no one, obtain a typewriter, and type up the entire handwritten mess and keep it organized. Return the entire lot when finished. Grandmother doesn’t appear to approve of any of the lot.

The cards are painfully amusing to read, but they also provide a deeper insight into the characters in the novel.

Shoreham, Arthur — married to Marie Louise Guilliame. Arthur is noted to be “lazy and weak” and “lives on Marie Louise’s money”. She’s essentially a slut and flirts heavily with any man, regardless of their availability.

Singleton, Benjamin — “charming devil” and married to Sarah Lowell with children who have “dirty little minds”. Flirts with women but is in love with the Stock Exchange. Well, no truer words are noted there than that, and for that reason, they are essentially flat broke.

That’s just a couple of sample entries, greatly abridged by me.

Upon returning with the book, Grandmother Singleton rips scathingly into Natalie.

Sick of the entire situation, Natalie packs her belongings. She came at the request, not because she desired to. And unlike the rest, she has no desire to put her hands out for the family money!

Future chapters revolve around all the assorted characters discussing their sex lives or lack thereof, finances, and the absurd whims and antics of the rich and elite that they themselves indulge in.

Each chapter pretty much delves into the failed relationships of the various family members. Everyone’s warped and flawed sexual desires comes to an abrupt end when Benjamin, sore and tired of Marie Louise open sexual flirtations with Benjamin, pulls a gun, shoots her then turns the gun upon himself. She survives. His shot took her in the shoulder, whereas Arthur blew his own head off.

Katherine is tired of her husband cheating on her. He’s mystified as she had agreed to their free love relationship. Katherine corrects him. She only agreed to it to keep him. She actually is in love with her husband. But, realizing that she has lost, she asks for a divorce. He’s only confused and baffled by the whole exchange.

Katherine asks to move in with Natalie and her boyfriend, Paul. She accepts. Then the widowed Marie Louise asks to likewise move in. Natalie again accepts, but she is certain Marie Louise might not actually move in. Too, who would want the nympho to have access to Paul?

Katherine’s soon-to-be ex-husband asks Natalie if it would be alright to call upon her future roommate. Natalie realizes that he’s come around to the fact he’s screwed up, wishes to mend his ways and start over again with Katherine, if at all possible. She thinks it a lovely idea.

In the end, Grandmother doesn’t die. The doctors get her kickstarted again. She pretty much kicks everyone out of the house and tells them they are all living in sin, regardless of whether they are married or not. In marriage, all are hypocrites as they are cheating on each other, regardless of the free love agreement they made. She’s disgusted with the whole lot of them. Of Natalie, not married but living with a single man, she acquiesces that at the least Natalie is in love with her man and gives her money to get a marriage license, immediately.

Today, Grace Lumpkin’s socialistic novel of free love and marital slavery and the demise of the family unit is quite scarce. The 1933 first edition in hardcover rarely turns up. In fact, at the time of this article, only one copy was found online for sale. Hardcover, no jacket, for $150.

The paperback edition was not known to exist to many indexers until 2022 when I stumbled across a worn, water-damaged copy (largely only affecting the spine and pages along the binding). No doubt there are more copies out there, closeted in private collections. No copies of the Canadian paperback edition have been found online. No copies are held in any libraries, according to WorldCat.

Some Take a Lover by Ann du Pre (aka: Grace Lumpkin) 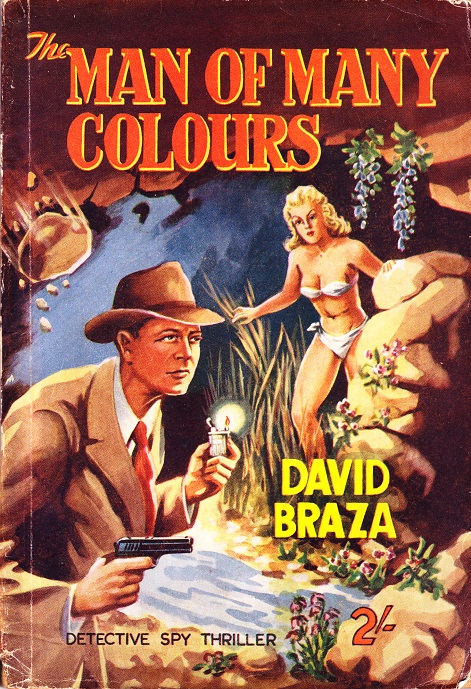