With Book 64, the publishers, Garden City Publishing, focused entirely on westerns, a clear indication that this genre outsold all other genres in the original series.

The rear covers on second-state editions announced forthcoming titles along with dates of publication, each on a monthly basis, beginning with this title, “Texas Men and Texas Cattle,” by E. E. Harriman, published 1st February 1926.

This edition also marks the first shift from 124-page to 188+ page volumes. The thicker volumes allowed the publishers a ready option to bind remainder stock later as hardcovers (which they did, on many of the future titles).

This long novelette hails from the July 1925 edition of Frontier. The cover art, by Nick Eggenhofer, originates with the 10 July 1924 edition of Short Stories.

The story is straight-forward from the onset, and heavily padded to the point of feeling quite dull at times. It’s neither a good book, nor a bad book, just the author’s choice of dialogue and dragging pulls down the value of this to me.

Will Stratton owns a ranch and is deep in debt. Loan sharks tricked him into a higher interest rate than verbally quoted, and years gone by, he is near bankruptcy. However, when a man from out West spends the night, traveling East, he learns that while cattle in Texas is worth pennies, folks in Arizona and California are in dire demand of beef, spending $25-40+ per head.

Breaking the law, he herds his cattle, along with two other neighborly ranchers, West, fighting their way past stampeding buffalo, Comanches, Apaches, rustlers, etc, before landing in Arizona and facing off against corruptly deputized men from Texas, serving a warrant. However, prior to this, the men had successfully sold the entire outfit and Stratton, by express, has posted due funds back to Texas, to his lawyer.

The three are intermittently jailed and post bond, await trial, and after two weeks go by, no word returns by express to set Stratton his fellow ranchers free. Thankfully, as luck would have it in the closing pages, an express man runs into the courtroom carrying a Texas-stamped envelope, with a letter from Stratton’s lawyer. The situation is deftly handled, and our men are free to roam….

Book 59 is “Devil Marked” by Edwin L. Sabin, returning to the series for the first time, since his inclusion with Book 2 in the original run.

The tale was originally printed in Argosy All-Story Weekly (1922 Sep: 9, 16, 23) in three installments, and also credited H. Bedford-Jones as a co-writer.

The date and era are never properly given to the reader, although we understand that it takes place some time during the mid-1800s. We are given real-life Governor Armijo, along with Bent’s Fort already being in existence.

The story opens with a backstabbing murder during a game of cards in New Orleans. A fourth player at the table steals away into the night and the remaining two take the money and likewise disappear.

Fast-forward a number of years, and we have two Cuban refugees (a boy and a girl) on a river boat. Of upper class, their parents are dead and they are seeking to locate their uncle in Santa Fe. While aboard, the boy is tricked into a game of cards and loses his family fortune. However, a brute of a man calls the bluff and announces the game to be “fixed.” Going by the name of Captain Badger, he takes he pair of Cubans under his assumed protective wing, while his true intentions are the gold doubloons.

Also aboard ship is the brother (Duprez) of the assassinated card-player. He has been hunting the killers his whole life, but is unaware that Badger is the backstabber.

After disembarking, Badger places the pair in a semi-reputable hotel (of sorts) and the girl stashes the gold among chimney ashes. The boy is lured away that night to play cards with Badger and company. Hours later, deeply drunk, he is duped by a note to hurry back to his sister. Likewise, the sister is informed that her brother is injured. She foolishly leaves hotel and gold behind, and is led away and confused in the by-streets and alleys, before the leading villain disappears without a trace. Lost and alone, she is shocked to find Duprez there and he brings her back to the hotel, only to find that ruffians are (falsely) assaulting the boy and Captain Badger.

Duprez vanishes too. In truth he snuck into the hotel, found the gold, and seized it for safekeeping, realizing the Captain to be a scoundrel.

However, one of the villains spotted Duprez depart the hotel and they convince the boy that he is a thief. The boy is entirely a (schmuck) throughout the entire novel, earnestly believing Badger and his claims.

Hiring a couple wagons to train down to Santa Fe, Badger insists on freely escorting the pair to the town. Meanwhile, he has abandoned the gold and wishes to avail himself of the girl.

Things go slightly awry, as the gold is recovered by the gang after they ambush Duprez in the desert and leaving him for dead. However, despite having been shot in the head (likely only grazed) he stalks the wagons and when a band of marauders attack the wagons, he rides in to save the day, only to ride out again when the girl is kidnapped.

Badger and the gang spot Duprez among the marauders and convince the boy that it was Duprez himself whom abducted the girl, and, has the gold, too! when in fact Badger has the bag of gold.

The whole story eventually shifts climatically to Santa Fe, where Duprez and Badger fight it out with large knives. You know the rest. Duprez slays Badger, gets the girl, and a ton of other details hanging in the wind prior as irrelevant suddenly manifest as important, but I rather not bog down this blog by ruining the background plot devices at work.

Unless “Loaded Dice,” this novelette here is far superior to that horrendous earlier piece, and while I dislike this genre, I do great dishonor to the tale itself were I not to recommend it for future reading among you fellow pulpsters!

W. C. Tuttle brings us “Tramps of the Range,” being book 57 in the Garden City Publishing pulp digest-paperback series, and originates within the 28 February 1923 edition of Adventure.

Reading this tale was a surreal pleasure, as I have never read a Hashknife Hartley and Sleepy Stevens story. Given that Tuttle has written dozens range-detective tales featuring the duo, this caught me off guard.

The tale is competently told, not quite so fast-paced nor loaded with action, but brings enough to the plate to keep the reader turning page after page to learn what comes next. It was a hard book to put down. Generally, I’m satisfied to stop at the next chapter, and found myself pages into the next one without any forethought.

Hartley and Stevens are investigating a heist and the banking association has the penitentiary early-release their lead suspect from a 5-year term, four years early, in the hopes that he will go straight to the stolen-cached loot. With a Tuttle story, you can bet your ass it ain’t gonna be that simple.

The pair are shot at, their horses are murdered, there is a love-triangle apparent, a girl is in love with the apparent heist-man, the heist-man’s father is gunned down as being the elusive “Black Rider” whom has been robbing carriages and such, etc.

Suffice to say, if you haven’t read a Hashknife Hartley and Sleepy Stevens story, this one was a sure-fire romp. And the comradeship between the two, the open goofiness and facetious attitude between one another makes their serious antics aloof, right until they come to climax and must relinquish their tendencies and come to grips with solving the robberies, murders, and twisted love affairs.

Thankfully, a good many of Tuttle’s tales are available in vintage paperback form, and can be readily found online, or, if you are fortunate enough to live near a decent used bookshop (I live in hell, so I’m not so lucky) then pay them a visit!

“Tramps of the Range” by W. C. Tuttle

Book 54 in the Garden City Publishing pulp digest-paperback series is “The Bandit of Devil’s Own,” by Lemuel L. de Bra. It was originally printed within the 1st November 1923 edition of Ace-High Magazine. 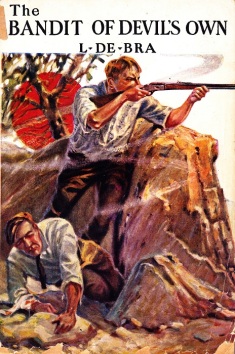 Bob Branton is a customs officer riding the line between Mexico and the United States, and after a bit of undercover work across the border, has arrested a pair of smugglers. He is taken off-guard and overtaken by the duo, but is relieved when a group of riders soon arrive. Believing them to be officers of the law he is gobsmacked to eventually learn that he has landed from one frying pan, into one that is most certainly much worse. For, the group of riders are outlaws!

Strangely enough to Branton, he and the pair are taken into the custody of the outlaws and are brought deep into a range called “The Devil’s Own.” Clearly believing this to be the secret lair of the outlaws, Branton tries to leave clues behind on the trail in case “real” officers try to trace them. All for naught. The leader of the gang catches onto Branton’s attempts and eventually they are all blind-folded.

While trying to escape to the lair, one of the smugglers is shot down and confesses to Branton that the girl is not his sister, but an adopted Yankee whose family died while she was young. This part of the plot is useless to the story, as she really does not figure into the remainder of the novel.

Once in the enemy camp, he learns that the gang is mining for a lost lode of gold. This tale is firmly held up by an old codger name of Jeb whom seems to have lost his marbles.

After much literary padding, Branton, Jeb, and another custom’s officer (that was held prisoner) effect their escape and hold off the enemy long enough for the cavalry to arrive and save their lives….

Honestly, in my humble opinion, not one of the author’s better efforts. He is clearly utilizing his own former occupational background in the use of this novel effort.

“The Bandit of Devil’s Own” by Lemuel L. De Bra
Loading Comments...