When the mangled copy of Robert Sidney Bowen’s Make Mine Murder slid across my line of sight, I cringed, but I read it. Why…? A year prior (2015 or early 2016) I had read, for the first time, a short story by Mr. Bowen appearing in a wartime issue of Dare-Devil Aces. The tale intrigued me enough to wonder if this novel was actually a wartime propaganda novel disguised as a murder-mystery, or really what is purported to be. 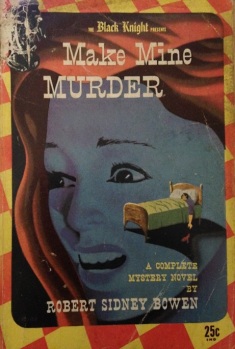 Make Mine Murder opens with Gerry Barnes arguing with future wife (Paula Grant) over his decision to become a private detective. Gerry served in the 2nd World War and has inherited enough money (from the stereotypical dead uncle) to do whatever he desires.

He tosses her the challenge of finding him his first case, preferably a nice juicy murder.

She does, which is where all credulity is thrown out the window. Still, the eye-rolling scenario is necessary to not only catapult our facetious protagonist into his first real case, but, toughen him up to reality. And boy, does he bungle it up awfully, showcasing that one, he is a flawed detective, and two, he can take his licks and learn from them. Ergo, he is human, and I like that in a story.

So…lovely Paula goes home to clean up and powder her nose, etc., and discovers a corpse in her bed. Hence, our charming cover art. She freaks out, and immediately phones Gerry, to get his ass over there, but pronto!

He tries. He really does. He fails….

An ape named Jake walks in and informs him that his boss demands his presence. Now. Gerry isn’t keen on keeping this newly formed appointment, and insists on getting past the ape. Nothing doing. He soon is introduced to the back seat of an automobile, tossed down, and kept in the dark as to the boss’s location.

The boss is one Mr. White, and while I’m not entirely certain, he may be an albino. He is described as good-looking and sporting the appearance of maintaining a tan, with pink eyes. His hair isn’t mentioned, but given his eyes and namesake, one leans toward believing he is an albino. But, then, how about that tan? Mystifying.

Mr. White wishes to hire the newly-created detective to find a missing person. Why? He wants an untried detective, with no reputation, to maintain a low-profile, plus, he has heard that Gerry has a huge ego. That ego means he will work hard to solve the case for Mr. White, with or without the hefty fee he promises.

Gerry wants no part of this heist-Gerry-and-hire-Gerry plan, but Mr. White and his ape have other plans, and he tactfully agrees to accept the offer, lest he disappears, too!

The novel goes haywire as Gerry attempts to locate the missing person, whom he is certain is Paula’s dead man, while keeping out of the reaches of the police inspector (Bierman), whom wants his full cooperation or he’ll stomp him like a bug. With the aid of the usual newspaperman thrown into the mix, and a handful of socialites to create confusion, the novel haphazardly is drawn to a final conclusion and the killer revealed, but not before further murders are committed. Gerry solves the case, and that is the only thing that saves his rump from being tossed into the slammer. The generally tongue-in-cheek mood of the story takes an abrupt hard-boiled edge in the concluding pages, which was very much not expected.

Naturally, I won’t reveal the actual workings of the plot or the killer’s identity. In reading the book, you’ll figure that out readily enough, I’m sure, but, Bowen has fun forcing Gerry to learn the truth for himself, and, why.

I thoroughly enjoyed this romp through postwar America and the images Bowen created. The socialite scenes are in keeping with how Hollywood perceives the rich and eccentric to act and behave, without conscious thought to the realities of the rest of the world.
The steady pace, snappy dialogues, and fast action keep the reader hooked.

Have YOU ever read this novel? I’d love to hear your input.

Bowen’s best remembered in the pulp community for creating the Dusty Ayres and His Battlebirds magazine series. Among American’s youth during World War Two, he is fondly recalled for his Dave Dawson series and Red Randall war series.

Wikipedia has an entry for the author, but I’ve not dug deep enough yet into it to discern how accurate some of the data actually is, however, it’s fair to say that the majority is.

Now, as it turns out, this title has seen a handful of editions.

The edition I have is the Black Knight edition. The cover art is unsigned, but features a man, dead, in a bed, and a woman looking on in horror. Thankfully, this scene actually does appear in the novel, and wasn’t a bogus cover created to generate sales.