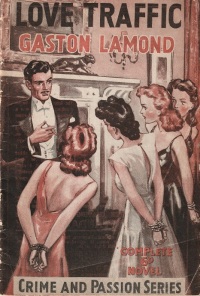 Love Traffic by Gaston Lamond was published early 1947 by the Curzon Publishing Company as part of their popular Crime and Passion Series. It ran 32 pages, tiny font, and advertised as a complete novel for 6d. In reality, it was a complete novelette of approximately 16,000 to 19,000 words.

To slightly confuse matters, the Crime and Passion Series also appears to have been published by Clifford Lewis & Co., in 1945–1946. There is much overlap between the two publishers, which suggests that the proposed dates of publication may be erroneous in several instances. After all, the dates are based on when the British Library (and other national libraries) reportedly received each title. This may not be in fact when they were truly published; merely when they were eventually sent to a library.

To add to the confusion, the British Library admits that during the World War Two years, large batches of books often were received but never accurately recorded until they could get around to them.

However, I’m not here to argue nor debate the inaccuracies of the recording dates of the British Library, etc. Those dates at the least give an idea when a book may have appeared, even if those dates could be way off the mark, as is the case with another publisher, Modern Fiction Ltd., but that discussion will be saved for a future post.

In Love Traffic, a cub reporter is assigned to stick with the river police and confirm whether their crime reporter is the river’s floating corpse or not. It is. The young man, Terry King, is now given the dead man’s job. His first assignment? Locate the killer(s) and solve the dead man’s case. Problem? Of course; the dead man never revealed the nature of his case! Digging through the man’s office, Terry unearths enough data to determine that girls are being abducted through a fraudulent acting-agency via a series of ever-changing ads placed in his own boss’s newspaper! The natural conclusion, due to a lack of developed characters up to this point, is that the boss might be behind the caper.

No, that’s not the case. Terry follows a lead after his girlfriend discovers another ad is placed in their paper (she works as a beauty consultant on the same paper) and she convinces Terry to allow her to go undercover as an actress. Despite his arguments, he fails to dissuade her, and foolishly does not inform the police of their plans.

He is knocked out at home, conked over the head, by a scar-faced assailant. She is chloroformed as soon as she enters a door for her interview. Waking up, she is in a vehicle with other girls who applied; they believe the whole charade is the real deal, and are being driven to a remote mansion, where they are later informed that they will board a plane for their final destination. Escaping her own captivity, Terry’s girlfriend (Miss Hinds, incidentally) breaks into the girl’s room and informs them of the reality. They are part of a sex trafficking racket!

The villains enter and the girls go from dolled-up babes to screaming tigers, baring fangs and claws and jumping onto the backs of the enemies. The young ladies are soon overpowered and their wrists are bound (see the image of the front cover). Soon, the lead villain prepares a series of hypodermics to inject into each girl, effectively knocking them out and enabling his crew to hoist them from the mansion and into a car outside, ready to roll to the airport.

Re-enter Terry, who prior had been knocked over the head. His assailant, the scar-faced man, plans to dump him into a river tunnel to drown to death. Terry breaks loose from his bonds, they fight, and he ends up losing and is dumped into the tunnel to die. Far from it, Terry fights to stay alive and swims a mile out of the narrowing tunnel only to find himself against the pipe’s fenced grate, and, the tide is rising!

Miraculously, he dives under water and discovers the grate does not go fully to the bottom and slithers under it. Breaking the surface for air, he hails a police-boat, is brought aboard, explains the situation, and faints from exhaustion. Awakening hours later, stripped naked of all clothes (and disposed of by the police as unsanitary after swimming in a sewage drain) Terry re-explains the kerfuffle to the police.

Well. You might guess the rest…but not before more pulp blood-and-thunder heroics ensue, including a final fight-scene between he and scar-face in the Underground railway tubes! Terry gets the girl, and the police arrive on the scene to capture the villains.