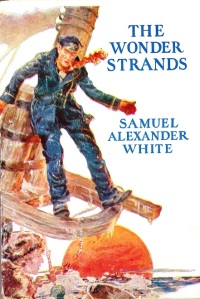 Appearing in the July 1921 edition of Short Stories magazine, “The Wonder Strands” by Samuel Alexander White is, strictly speaking, a Frozen North sea voyaging story fraught with peril and loads of distrust and of course, a girl.

The story has Captain Arnold Rea to handle the Silver Tern, and the second in command is one Gregory Cowan, whom immediately hates Arnold because he had thought to have received the captaincy commission of the Silver Tern himself, from the boss, Horace Martindale.

Horace has other ideas, for a variety of reasons. Horace was contacted by a Doctor Ribero up the coast. He wishes to charter a vessel in order to perform oceanography experiments along the currents up through the Grand Banks. Additionally, he just married a girl about 30 years his junior, and this voyage will act as their honeymoon.

Horace knows that Cowan can’t be trusted around beautiful women, so entrusts the ship into Arnold’s capable hands. They ship out and dock up the coast and bring aboard the pair. And what a pair! The doctor and wife seem as distant as can be upon boarding. The doctor is all about his research, while the wife seems at a loss.

Looking to play host to Mrs. Ribero, Captain Rea takes it upon himself to anchor at various points along the coastline and show the historical areas, etc, while the doctor on-board performs his experiments. Along the way, Captain Rea has made it a point to keep Cowan firmly away from the girl, to control his lust.

Cowan has other ideas. Upon anchoring, he plays up the jealousy card to the doctor, whom, in turns out, is somewhat insane, and flies into a rage. He demands his wife be kicked off the ship and landed and the captain tossed. Cowan is only too happy to oblige. The wife makes ashore and the captain dives overboard and swims ashore. Time passes and they are eventually rescued.

Nothing further is heard of the Silver Tern for several months, until Cowan one day appears. Turns out he was later unseated by Ribero, too, and the doctor took control of the ship and headed deeper into the north. The fate of the ship goes a year unknown…until an explorer brings word of a known shipwreck and Eskimos in the region possessing parts of the ship with the name on the boards.

Now knowing that the ship eventually wrecked, Horace is once again commissioned to charter a vessel to go to the far frozen reaches of the North during the dead of winter. Horace taps Captain Arnold to ship out on the Skraeling and accidentally pairs him up with the scurvy dog Cowan, whom is piloting an ice-breaker, the Biscayan.

And to further the surprises, the person chartering both is the girl. She has tons of money of her own (prior to the marriage). She wishes to investigate the ultimate fate of her husband.

While pushing through the ice, Captain Rea’s ship is crushed and the crew and girl cross the ice to Cowan’s ship. Rea climbs the mast and immediately spots open water and wonders if Cowan purposely dragged his ship through dangerous ice the whole time in order to cripple his vessel. Leaving the suggestion openly before Cowan, whom is angered at the confrontation, Rea shakes it off as irrelevant and the pair captain the vessel through the ice.

The girl realizes friction between the two, and that a boat can’t be captained by two men. Something surely is afoot. They eventually crash through the ice barrier, and time passes…they find the remains of a wreck on shore and to their amazement, a year missing, out steps Doctor Ribero, fully in health, but, unsound in mind. He fails to recognize either captain or the girl as his wife.

Back on board, the doctor thinks he is still in control of the chartered vessels, believing they were sent to retrieve him and continue his projects, near mutiny breaks out between Rea’s and Cowan’s men. Cowan has his men cowed in fear of the doctor, being naturally superstitious about mentally deranged persons at sea. Rea, realizing a mutiny is at-hand, tries to take control of the situation, and the girl grabs a gun from her cabin.

To worsen matters, the doctor sees the confrontation and his mind snaps immediately back a whole year to when he tossed Rea and the girl overboard. That precise scene is wiped from his mind, but, not the act. He once again demands Cowan to perform the very same! and naturally Cowan attempts to take advantage of that situation and do just that.

The girl fires her gun and misses Cowan (on purpose) by scant inches. Everyone is happy to be in a sea brawl, but, nobody wants to cater to a woman with a handgun. The scuffle dies down, and Rea talks the doctor slowly into remembering his obliterated year.

Unfortunately, it is too late to reconcile the ship’s stoppage, for it is wedged firmly in the ice and slowly being pulled adrift and crushing. Rea jumps ship and runs across the ice to the shoreline (yes, they are near shore, and to explain this ruins the plot) and breaks into a shuttered lighthouse, activates the wireless, and sends a distress call to Martindale, with coordinates and future approximate drift position.

The ship sure enough begins to slowly sink, and, as time passes, they realize that they are near the Grand Banks. The doctor takes advantage of this, being the last location he wanted to measure water temperatures. To his and Rea’s horror, they discover the water current under the ice is quite warm. The ice immediately cracks and Rea runs back to the ship, and has everyone board the smaller side crafts.

Martindale and his ship appear on the horizon, but, too late. The doctor, foolishly trying to complete his work, finally starts late to run back to the sinking ship. The falls through the ice and vanishes, but not before the men reach down and rescue the last of his research.

Thus ends Doctor Ribero, and, we are left to assume the widow will presumably marry Captain Arnold Rea, though it is never actually inferred that a true romance ever bloomed, save for the one moment when she calls him “Arnold” rather than “Captain.”

Typically, I hate sea stories, but I must confess that I found this one to be delightful.