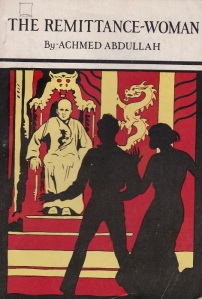 Book 42 is “The Remittance-Woman,” by Achmed Abdullah, a man whom you can always rely on to bring you some quality Oriental fiction. This tale originates within the July 1922 pulp Everybody’s Magazine.

Marie Campbell is a hopeless bounder of an American, daughter to a wealthy hardworking man, whom doles out to her a regular allowance which she spends with reckless regard. She has no concept of reality and talks, dresses, and behaves more like a man than a lady should. Annoyed at her attitude, her father gives her two options: choose between being a man or a woman!

She chooses to be treated as a man, and he accepts. In this regard, she is to leave America, make good on her own, and he will pay  her quarterly an allowance of $1500 (negotiated UP by her from one-grand, incidentally). She agrees, and nonchalantly states she will visit China.

Appalled by her decision, he insists that she take along with her a thumb-sized Chinese vase, but keep it hidden and only share its existence when she deems it necessary. Baffled by his attitude toward a fragile vase, she readily agrees and we later find her in China at a hotel, already having blown through two quarters’ allowances and deep in debt at the hotel. She has foolishly, childishly, spent her funds on Chinese items at extravagant prices.

Things go awry when the hotel maid is murdered and a series of men railroad her into jail, because she refuses to yield up what they desire…the Chinese vase!

While in jail, she effects her escape, only to land within the confines of the Temple of Horrors. She negotiates her leave (with the man featured on the front cover of the book) and while being escorted out, manages once again to escape.

With the aid of an English sailor (the male silhouette featured on the cover) she makes her way to the grounds of a Russian, whom absurdly she immediately falls in love with and he, in turn, with her, at first sight. She confesses the location of the missing vase to him, but he does not pursue it. Instead, she is surrendered into the hands of a distant relative, whom delivers her safely to the house of another, where one of the men, whom had her arrested earlier in the novel, is agitating over her disappearance, and the Chinese warpath against foreigners that is about to occur.

She boldly walks in and gaily laughs about the whole affair and tells the man where the vase is hidden. Thankfully, to make the novel shorter, the house they are at, its landed estates happen to butt-up-against the grounds of the aforementioned hotel, which he operates (how convenient!)….. He hurls his body out the door, sprints, retrieves the vase, and brings it back.

Marie takes the vase and goes back to the Temple of Horrors, demands the man on the throne surrender and proclaim peace, work with the three men that attempted to secure the vase from her, or, she will destroy the vase, which contains, secreted within, power of dominion, etc. Her threat is not necessary, as all present believe she is capable of such heresy, since her recently deceased uncle destroyed the vase’s twin.

And so, peace is restored to the lands of China, war called off, and Marie claims the Russian as her own to marry and take back with her to America.

Given the Hollywood’s modern zeal for pushing strong heroine-led movies upon the populace, they should perhaps give this novel some consideration, as it amply yields up tons of foreign color and intrigue. Naturally, it would need a serious re-write….