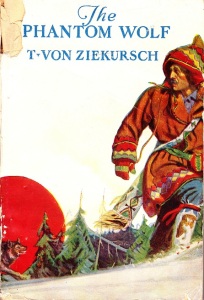 An interesting novelette written by wilderness-writer Theodore Von Ziekursch, both the story and the cover art hail from the 10 September 1922 edition of Short Stories magazine. Cover art is by Remington Schuyler. This is the first of only a few titles by Ziekursch to be bound as a solo publication.

Shortly after the death of his father, Jim Carter learns that many years ago, his dad had invested in timber in the far frozen reaches of the North country. Packing his necessities, he departs Kentucky and goes north to investigate the claim, but only after receiving a letter from his father’s two business partners up there, that state the timber isn’t playing out to financial rewards any longer but are willing to buy him out. That play doesn’t make much sense, as it is a contradiction.

Sensing scoundrels afoot, he travels north and while paddling the river crashes in the rapids. He is miraculously saved by a French-Indian by name of Beaumois. The half-breed takes him where Carter seeks, but with curiosity. (Why Beaumois happens to be in the area to begin with is bewildering, but, this is one of the few faults with the author’s novel).

Nursed back to health at the half-breed’s cabin, Carter meets a missionary man and a young woman residing with him. Carter does not detail why he is in this far-flung tract. Eventually, he goes to the village and spots a man beating on an Indian whom has captured a wolf. Carter doesn’t take well to the beating and jumps into the the mix, beating back the attacker. The Indian shuffles away and the wolf, also beaten senseless, drags itself away, unnoticed.

Here, Carter meets Frazier and Holt, the pair that tried to buy out his (deceased) father. Twas Holt that beat on both the Indian and kicked the wolf heavily and threw it against a cabin wall. Having met the opposition, Carter departs and later comes upon the very same wolf with its pack, attacking a lynx. The lynx causes the lead wolf serious injury, and begin to fall upon him with savagery.

Not disposed to sitting idle, Carter begins shooting the attackers, and finds that the lead wolf has a broken jaw and happens to be very same as the one from the village. Realizing the wolf is wild, not a dog, he knows better than to approach it. All the same, he coaxes it to follow him to his cabin. Remarkably, like all wilderness novels of this vein, the wolf fights against its natural inborn instincts to shy away from humans, etc, and finally, pushes its ailing body into the cabin.

Carter carefully maintains his distance throughout while feeding the wolf and at one point wakes up to find the wolf licking his outstretched hand before silently withdrawing. Having gotten better, the wolf departs, but, maintains a vigil around Carter, protecting him from potential harm.

Too, the phantom wolf has a score to settle…with Holt.

The climax comes early when Frazier and Holt announce that they know who Carter is, that they were aware that his dad was already dead, etc. Carter earlier has claimed to possess upon his person a signed contract with the men and his father. With the aid of other timber men, they assault his cabin and beat him up, with the aim to secure that paper and destroy it. They steal his wallet and escape back to their base.

Despondent over the loss, Carter learns that the paper was stolen earlier, but the girl, whom knew the men would make such a play. She surrenders the document back into Carter’s care, and he immediately decides to trek hundreds of miles to civilization to file warrants against Frazier and Holt.

The chase is on! Carter is on foot, hiking across the frozen bad lands, and hours later, the villains give chase on sleds drawn by huskies. Along the way, they are baffled to learn that ahead of them rides another sled, drawn by a female and an Indian! Unbeknownst to them, yet another Indian is on the trail, Beaumois, from earlier in the novel. He wants Carter out of the way himself, privately, because he is in love with the girl and doesn’t believe Carter is playing fair with her affections.

The plot becomes deeply involved and convoluted for a while.

The girl and Indian (being the one that originally caught the wolf) catch up to Carter.

The villains camp out a short ways back, while Beaumois watches on. Shockingly, Frazier steals the food rations and cuts the traces, etc, and leaves Holt and the other men stranded. He hurries over to Carter and company and tells them to rapidly get their shit together and they must flee. Heeding his advice, they do just that, but Carter insists the food be left behind. He won’t be party to wanton murder.

After Frazier has stolen the food, during the night, the phantom wolf stole in and attacked Holt. Badly injured, he eventually dies, frozen to death, and of gangrene.

Skipping some of the plot…we learn that Frazier is secretly the father of the girl, and brother to the missionary man, hence the reluctance to kill Carter unnecessarily. (Forgiveness and hugs all-around).

However, the story is not over! We’ve yet to reckon with Beaumois, whom calls out Carter. He places Carter in an awful position to leave or be slain by Beaumois, or, another option, is given a gun and told that he can kill Beaumois instead.

Carter surrenders the gun to Beaumois. He won’t slay the man over the girl, nor, will he leave. He accepts his fate that Beaumois will simply have to kill him, instead. However, the phantom wolf has other ideas and jumps the half-breed, but not before being shot full in the face. The wolf howls in pain and writhes about the ground, badly blinded. The half-breed, impressed on all counts, shows that the gun was loaded with blanks, but, at close range, nonetheless the discharge deeply affected the wolf.

Carter gets the girl, and, in the end, the blinded wolf with the broken jaw slowly, blindly, drags itself to the cabin…..