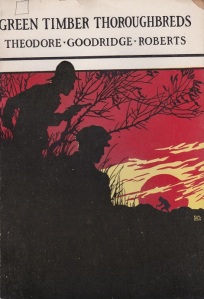 Book 45 is “Green Timber Thoroughbreds” by Theodore Goodridge Roberts, with cover illustration by Lynn Bogue Hunt. The pulp tale was originally featured in the 10 November 1923 edition of Short Stories magazine.

The tale opens with Robert Vane walking into a wilderness north town and a house is on fire. He rescues an old man and then proceeds up a ladder to carry out another body that is unconscious from smoke inhalation. Then he departs the scene and seeks shelter at the village hotel.

The next day, the town is a-buzz over the whole ordeal, and Vane is thanked profusely for saving Joe. When he is greeted and thanked in person by “Joe” he is nonplussed to learn that “Joe” is a girl, short for Josephine.

He confesses to the hotelier that he is interested in horses, and seeking a specific breed locally that has good blood in it. The tale is more convoluted, in that the horses’ pedigrees all dial back a century when Vane’s grandparents brought over a horse of fine-standing, but was stolen. Stories of great horse races in this region and markings lead Vane to the quiet remote town to investigate if these are descendants of the original.

So he seeks to buy one horse but the locals that own the breeds are a nefarious, murderous bunch of scoundrels, and, illegally brewing during prohibition. So, thinking he is a  government man, they go out of their way to capture and kill him, but fail.

Finally, they do capture him, drag him far out into the woods and leave him to do. Unfortunately for them, Joe trails the villains, frees Vane, and they, overnight, through a snowstorm, find their way to a cabin and collapse.

They recover overnight with the cabin’s tenants, and two weeks later, marry.

The villains are all arrested by the sheriff.

It’s not really the author’s best work, by a long-shot, but, I am happy to have had the pleasure to read this novel, since it is a damn hard one to obtain. The story falls flat with me since I have zero interest in horse racing and the background of the pedigrees, etc, which was used more as “padding” then necessary to the overall story. 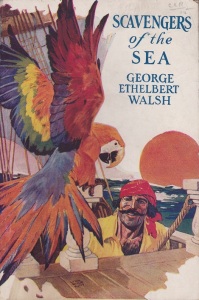 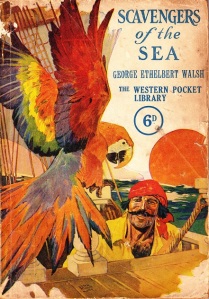 Originally published in the September 1920 edition of Short Stories magazine, the cover was rendered by Lynn Bogue Hunt and itself originates from the 25 November 1921 issue. The contents of the story, while they do feature Caribbean pirates, do not feature a swarthy Spaniard pirate nor a parrot of any sort.

In 1929, World’s Work, a UK publisher, issued 10 titles from the original Garden City series. In their short-run reprint series, “Scavengers of the Sea” was Number 5.

The story opens with Dick Jordan clinging to a piece of wood for several days, having been the only survivor in his lifeboat after it flipped from a wave. Other boats had also dropped from the lead ship, but of these, Dick knows not. He is near the end of his life and wits’ end when he is rescued (sort of) by pirates. Realizing his dire predicament, he lies to the leader (Tucu) and convinces him that before the ship went under, he had jewels secured to a buoyant device that only he would recognize.

Not entirely believing Dick’s tale, Tucu agrees to keep him alive in lieu of obtaining these mythical jewels. While en route to the fake site, the pirates come across a schooner that is in disarray. Turns out the ship’s crew mutinied and abandoned ship after the captain lost his marbles, and they refused to take orders from his ocean-savvy daughter, Rose.

Realizing that the pirates intend to board the untended vessel, Dick jumps overboard and swims to Rose’s schooner, boards her, and helps to repel the pirates. The pirates depart, but overnight overcome Rose and Dick.

Having secured the schooner, the pirates listen with glee to the mad rantings of her father, the captain. He claims to have a treasure aboard. To no avail, they tear apart the ship in search of the treasure. Angered, they leave two pirates aboard the schooner and take Dick with them in search of the jewels. While departing, a huge storm rips through the area and Dick uses the opportunity to allow a wave washing over the deck to carry him back out to sea.

Once more adrift in the waters, he swims and luckily finds the schooner. Climbing aboard, he finds one pirate dead and the other overtaking Rose. This situation is soon overcome, but, the pair are desolately still faced with peril of the schooner potentially sinking in the storm. The ship is madly set adrift and whirling and miraculously, overnight, the captain regains his marbles after having been struck the prior day by the two pirates upon the noodle.

The three managed to wrestle the ship to an island that they spot in the distance and avoid crashing her upon the rocks. Dick disembarks, to explore the island. Cresting the lonely hill, he is dismayed to find that on the other side, safely anchored, is the pirate ship. The ship appears to be mostly deserted, and the reason why manifest readily when he spots them on the beach assaulting a group of survivors from a lifeboat that sank from the very same ship that Dick was on.

Too, he watches as a man, Hen Pettigrew, is gunned down three times. Hen is an officer of the law that aboard the damned ship, had arrested Dick on charges of theft. Dick is loathe to go down and save the survivors, so, returns to the schooner, and relays the news. With weapons, they could turn back the pirates and save the day. The captain chuckles that while the pirates may have confiscated all the visible weapons aboard the schooner, he did have some secreted about the ship in case of mutiny.

The captain turns up about a half-dozen automatic pistols. The trio climb the crest and Dick fights his way down to the survivors, arming the competent marksman about them with gun and ammunition.

Enraged by this, Tucu leads his pirates in a charge against the motley crew of survivors and are repelled by a steady onslaught of murderous humming bees that beat a metallic rhythm of pop and perforation of bodily parts. Now, in full retreat, Tucu takes the lead back to his ship but is shocked to find one body on the beach ahead of him alive….Hen Pettigrew! Angered beyond rational reasoning, rather than continual flight, he stops to ventilate Hen’s cranial-coop but a bullet shatters his aim and renders his arm useless.

Dick crashes into him and takes him down. Secured, he wedges his own gun into his waist, when abruptly Tucu unleashes a stowed blade and begins to assault the worn Dick. Rose to the rescue! She shoots Tucu down, saving Dick’s life.

Hen relays that he believes Dick innocent of charges, but must still bring him in. Penniless to hire an attorney to represent him, Rose states that her father was telling the truth regarding treasure and states that she will hire the best to save the man she loves….

2015 November 24: “Scavengers of the Sea” by George Ethelbert Walsh