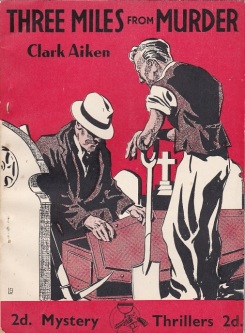 In the late 1930s, English publisher Sharman Ellis Ltd. acquired the right to reprint several of Frederick C. Davis’s pulp stories.  It’s unclear whether those rights were obtained via the author, or the original publishers, or, his agent (if he had one).

The cover art is simply signed as “LB.”

None of the booklets in the series carry a copyright notice. They were published prior to World War Two, perhaps late 1936 or early 1937. The rear cover quotes the first four titles in the “Mystery Thrillers” series (of which this is #3) and that they are to be issued monthly. The featured read here contains two stories, and runs a total of 64 pages.

In Three Miles from Murder, Nicholas Bansak, a slot-machine racketeer, is shot to death in his home. There is no evidence as to who the shooter is. The maid hears the shot, finds his corpse, and quite naturally, phones the police. Arriving are Detective Lieutenant Frank Cooper. He is described as: “alert, muscular tension of a race horse.” His counterpart is lethargic Detective Sergeant Otto Schellhaus, and Cooper has zero respect for his partner, whom later remarks that he is no Sherlock Holmes (note, however, that S. H. figures in Otto’s surname). The pair are given 24-hours to solve the mystery or lose their jobs. To worsen the predicament, the body disappears! No body, no incriminating bullet, no murder! Right? Wrong. The maid saw the body, and the pair saw the body just before it pulled a Houdini. Crime has been running rampant in the city, and their only clue as a possible culprit to the murder, is one Ed Fox, whom now is the sole operator of slot-machines. The rash Cooper is convinced that Fox has fled the city upon calling at his home and finding he has not returned home overnight. The city is cordoned off, calls are placed, etc. Otto has other ideas, but Cooper isn’t interested. So, he nonchalantly follows up on them himself. He discovers that Fox has not fled, but, rather, is simply at work. Fox threatens to sue for slander and false-arrest. He is released, despite Cooper’s attempts to detain him. While Cooper is chasing up various angles like a rabid attack dog, Otto decides to investigate if it were indeed possible for Ed Fox to commit the crime. He learns that Fox’s home isn’t far from Bansak’s home, and, tallies off the mileage. While illegally snooping in Fox’s auto, he discovers a receipt noting that the car was recently worked on. Going to the shop, he obtains the mileage on the car. With this information, he maps out the mileage home, to the murder, etc. While driving all over town trying to discover just where a missing 3 miles may have led Fox (if he committed the crime) he discovers one circuitous route: the cemetery. And that very morning, the Chief of Police had a member of his family buried! Convinced that Fox slipped in and stole the body while they were distracted, Otto illegally convinces the caretaker to unearth the casket and crack it open. Scarily enough, only the body that is supposed to be present is accounted for. Worse than that, Cooper arrives on the scene and is mortified that find that Otto has dug up the Chief’s family. While being reprimanded, Otto freaks out and grabs Cooper into the car, and speeds all around the city like a raving lunatic the mileage per destination and insists the body has to be at the cemetery. They then strike upon the idea that the body IS at the cemetery, UNDER the casket. Returning to the scene, they lift the casket out of the ground and dig further. They haven’t got far to go before they find Bansak’s corpse and ultimately, prove that the bullet belongs to Fox’s gun.

Three Miles from Murder (via his alias Clark Aiken) was originally published under his own name in Detective Fiction Weekly (17 June 1933) and copped that edition’s cover (erroneously as “Three Miles to Murder”).

In the concluding story, Marmon speeds to the home of the Hartleys. The family has a legacy of being buried alive via freak accidents. Worse, Marmon’s fiancee is afraid of being buried alive. Her father was deemed dead, and to their horror, rose from the dead, only later to die in a mine cave-in. She informs Marmon that she suffers from the same malady that her father had, and that while she may appear dead, with no pulse, breath, etc., she is actually in a trance-like state. After her brother is shot fatally while chasing a grave-robber, Bernice faints and is presumed dead. The embalmers are brought in and Marmon chases them out. Eventually he resorts to violence, and carries a gun. Much time passes and someone breaks into her room. Hearing the noise, and bashes in the door and shoots the perpetrator whom is about to ram a knife into her chest. They tussle and someone bashes him over the head. The villain(s) depart down a trellis and escape. Marmon discovers the knife was left behind and realizes it belongs to the armory downstairs. Two others live in the house, and Marmon accuses them of attempted murder, the only logical option. While remaining once more on guard, they bring him food and tea and he staggers and passes out. His drink was drugged! Waking, he discovers Bernice removed and they couple acknowledge that they did dope his drink with sleeping tablets, because he was acting irrational. Speeding off to the embalmers, he bursts in as they are about to drain Bernice of her fluids. Pulling his gun, he locks them in a closet and takes her away to a secret location. Eventually, he thinks he hears her call faintly for water…. Or is it all really in his mind? The police are certain that he was the one that murdered Bernice’s brother, and that is why she fainted dead. Marmon discovers a letter with notes about the mother and jewels and following a lead, digs up the mother and learns that her necklace is fake! Only one person could have had access and the time to effect a swap: the embalmers. Calling the pair back to his house to claim the body, and to finally give up, the police instead appear first. Marmon begs them off and states the real murderer(s) are due. The couple, the cops, Marmon, and finally the embalmers are present. He reveals the fake necklace and lays the claim before the embalmers, whom stridently deny the accusations. There is no evidence. Or is there? Didn’t Bernice perchance see her brother’s killers? She did. She walks in and everyone is stunned. The conclusion is evident, as she points out who the killers are….

The Embalmers carries no byline. The story was originally published under his alias Garry Grant in Dime Mystery Magazine (March 1936).

Both stories are fun, entrancingly interesting reads. I look forward to obtaining and reading further stories by Frederick C. Davis in the near future. Stay tuned !!!