Published by The Star Publishing Corporation, GALAXY lasted from 1946 through at least 1949. Numbering is difficult for this publication. It began in January and ran successively for 8 monthly installments, concluding with the August 1946 edition. Then came the pictured edition here, simply dated Autumn. One “Eric H. Hale” is given to have been the editor, a man for whom I know nothing about.

These thin side-stapled pocket magazines contained photos of actresses and models, tons of cartoon drawings, numerous short stories, articles and advertisements. Interestingly enough, the last interior page has two ads, for Outlands: A Magazine for Adventurous Minds and for the New Realm Magazine.

The stories within are hardly noteworthy, running a page or two in length. This issue sports two known entities: Kay Hammond-Davies and N. Wesley Firth. The former supplies a tale in which a young couple and their dog move into a home and must rid their garden of a pesky rabbit. All three are gung-ho toward wanton murder until the girl has a change of heart for the innocent bunny. The husband blows its brains out and the dog pounces and she calls them beasts, much to their bewilderment. Firth’s short-short involves a French artist with poor English-speaking skills explaining why he will no longer paint any further nudes in the future. Most are general fiction tales, with a humorous slant.

The best features of this magazine are the assorted line-drawn cartoons. Contributors include the talented comic artists Denis Gifford and Denis McLoughlin. 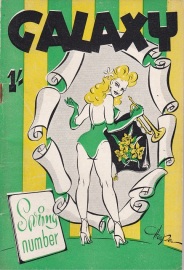 The Spring 1947 issue (the year is actually  not given) sports neither a contents page nor are any of the pages numbered.

Noteworthy contents include the short fantasy “Flesh and Blood” by Eira Williams and a tale by David Boyce.

While the gifted “named” artists are missing from this issue, there are some decent “indecent” illustrations that give way to a good chuckle, such as a man’s wife stuffing her bra…. 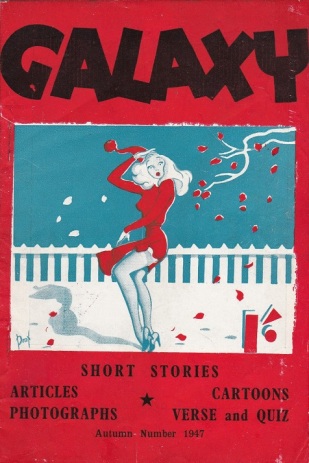 Trade distributors throughout the world are given to be:
Rolls House Publishing Co., Ltd.
Rolls House
2 Bream Buildings, London, E.C.4

Fiction stories abound with the usual motley crew of illustrators, photos and a Hollywood article supplied by David Boyce. Talented artist Bob Monkhouse supplies a half-pager, while the best fiction tale is a one-page ghoul from beyond the grave! Patrick S. Selby also supplies a short story. His name might best be remembered for having copped the cover to New Worlds #2 with “Space Ship 13.”

And we wrap up this article with the last edition in my possession, the Spring 1948 issue.

Story contributors include editor Beryl Cousins, Joan Seager, and a tale by Cay van Ash, largely remembered for  bicycling to the home of writer Sax Rohmer to obtain an interview. He later became Rohmer’s secretary and then departed for Japan, the two becoming fast friends until Sax Rohmer’s death.

Artwork is supplied by all the regulars of the time, including Griff, James Symington, Housley, Hix, Kenneth Mahood, and the talented Bob Monkhouse returns with two witty pieces.