Exactly twenty years ago this Fall, I drove to Dearborn, Michigan, and visited Howard DeVore, at his request, to pick over his collection. Only non-American items were optioned, and I walked out with a small bundle, on my first of many visits.

One of the booklets that I left with (that day) was “The Man who Tilted the Earth” by Justin Atholl. It was published by the Mitre Press in 1943. The artwork is unsigned, but may be the work of Jeff Cook, if one were to believe the lower right skyscraper “windows” were actually him cleverly trying to disguise the signing of his name. The formation of a “J” and “e” are readily visible down there. 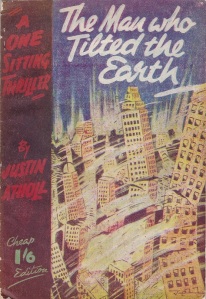 Do not adjust rub your eyes. You aren’t seeing double. You are also not seeing an enhanced image. The one on the left is (was) Howard’s copy. Not too shabby a copy, I think, once the second copy (on the right) arrived, with a tape repaired cover, etc.

The identity of Justin Atholl baffled me for over a decade until a breakthrough occurred. Back around 2005, I was reading one his short stories, when it occurred to me that I had read it somewhere else … in a 1930s horror anthology, under another name, that of Sidney Denham. How the correlation was never drawn prior, since they are recorded side-by-side in weird / horror anthologies, is bewildering, but, these things happen….

I have kept this a secret for the past decade, but since the news just broke this year via another researcher, no point in keeping it mum any longer. The reason I kept it a secret was that I wanted concrete evidence that Atholl had not been used by more than one author. His 1940s novels do not exercise a firm uniformity among themselves. Due to the recently offered-for-sale on ABE of a book noting that T. S. Denham authored “The Perfect Murder,” we now know he did author at least ONE of the 1940s novels, but one short story and one novel does not mean that he is the sole author behind Atholl.

However, not released yet is the fact that he also utilized the alias Arthur Armstrong. Whether this alias was exclusive to Denham is also unknown, but, it was also applied to the very same short story that first united Atholl with Denham in my decade-old discovery!

“The Man who Tilted the Earth” involves the intrepid investigations of reporter John Renvers into Dr. Surrocks claims of having constructed a super weapon. However, ahead of him is multi-millionaire villain Zachavitch (note that wartime villains often had foreign-sounding names). Zachavitch has already latched onto Surrocks and is privately funding his project, with the intent to obliterate a massive iron deposit in the Arctic, thereby causing the poles to shift and worthless lands he has purchased to suddenly become very valuable. Untold millions of people would perish in the explosion, cities will topple, sea level areas vanish under mountain of water, etc. Only Renvers, with the aid of Surrocks lovely (and intelligent) daughter, can possibly try to thwart the evil Zachavitch and the mentally warped Dr. Surrocks from accomplishing their maniacal goal … world domination.

2015 September 11: “The Man Who Tilted the Earth” by Justin Atholl
Loading Comments...