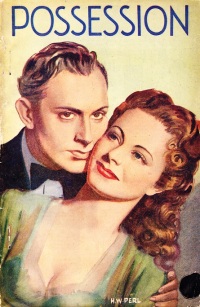 Possession was published by Grant Hughes Ltd., circa 1948.
The novel carries no byline on the covers, but the interior title page gives the author as Sheila A. Firth; she was the daughter of prolific author Norman Firth. Tragedy haunted the Firth family when Norman inexplicably died at the young age of 29, on 13-Dec-1949; cause of death given then was tuberculosis. He left behind Sheila (age 4) and a young wife (age 22).

The second edition was printed and published by Grant Hughes, this time featuring one of Perl’s regular models. It’s unknown how well this edition sold. Both the inside front & rear cover is entirely white, no ads present.

Remarkably, neither edition is held by the British Library nor any other known major English library per COPAC, nor worldwide per WorldCat. 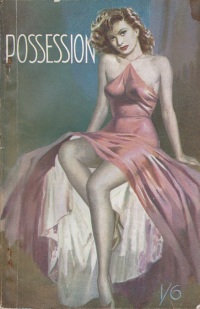 Contrary to the typical romantic plots, our heroine does NOT give up her Hollywood job in favor of love, but she is mixed up in the cliché “eternal triangle” plot…

Andrea Ellis was a nobody until discovered by producer Harry Grant. Pairing her with Steward Tracy for 5 years, the two have made Harry Grant a fortune and Andrea Ellis is now in demand to play the lead in the film version of the same play. Only thing is, she desires a break from acting.

Refusing to inform Harry Grant where she intends to vacation, she foolishly informs her private staff, and Steward Tracy, deeply in love with her, manages to extract the information. Learning she intends to abandon New York in favor of the beaches and playgrounds of Miami, he lets slip that he will vacation with her. Frustrated at the deception, she’s doubly-cross that Steward revealed her plans to Harry Grant.

Grant sees an angle and sends publicity agent Carl Cotton south to set the ball rolling, only that “ball” turns into a wrecking ball.

Arriving in Miami, Steward proposes marriage (he has been proposing numerous times and she has always turned him down). Now, upon the beach, she finally accepts, reluctantly, and he coerces a promise from her to not break the promise. Desiring to keep the engagement secret fails when a cub-reporter for a local paper arrives on the scene. Or was the reporter tipped off, further forcing the marriage?

To further worsen matters, Carl Cotton makes an appearance during the newsboy’s interview, and announces that Andrea Ellis is to be the “prize” date at the Krackly Krispy Krunchies Hour radio show; the winner is selected from a finalist of three men who are to provide the new winning tune for the show. She is not amused. The first two contestants aren’t noteworthy, but the third dazzles her the moment they each set eyes upon one another. It’s literally love at first sight.

The young man is Jay Niles, a “bum” who lives in the slums of Miami, in a converted railway car. Andrea, fascinated by the musician, convinces Jay to show her where he lives. Believing she is just some snob and wants to look down on the common poor person that can’t make good, they exchange words and she finally proves she is more than just an elitist. After all, she did not dress fancy, did not put on make-up, nor do her hair. She came to the date as a normal-looking girl.

The pair elude Carl Cotton’s appointed paparazzi and spend private hours alone. Andrea is intrigued to learn more about Jay and his musical interests; he seems to be quite talented. He plays an instrumental piece for her; she then asks to have it as a keepsake. Jay doesn’t care. It’s been offered everywhere. Nobody wants that type.

Never to see another again, she returns to her life and, when the producer offers her the next Broadway gig, she learns that the entire play is to be essentially silent, and without music! Discovering that Jay’s piece would fit the play perfectly, she presents it to Harry Grant only to be rebuffed without hearing the musical piece.

She then goes to the author of Harry’s production, and there has the music played. He loves it and tells Harry it is “in.”

Displeased with her move, Harry must accept the author’s decision, and further, realizes Andrea must be in love or infatuated with Jay. He is eager to destroy this relationship as he likes her and Steward Tracy together.

Jay becomes a success along with the play; his wallet grows from dust to greenbacks, etc. All the while, Jay refuses to see Andrea alone, as he does not wish to interfere with her engagement to Steward Tracy, who he personally feels is a swell guy.

But, when Steward accepts an acting job in Hollywood, and is gone for weeks or months, Andrea and Jay can no longer repress their desires and well…you can guess the rest! Still, they must keep their meetings secret lest the press discover the truth; their bosses too, and worse yet would be for Steward Tracy to learn second-hand that she has been unfaithful.

Jay insists she inform Steward in person of her decision to break off the engagement, but before she can, on his return flight to New York, the plane goes down in flames, killing nearly everyone onboard. Miraculously, Steward survives, only to have both legs fully amputated.

Jay convinces her that she must marry Steward as the truth would devastate him. Despite her desires not to, she is eventually guilted into marrying Steward. Jay removes himself entirely from the scene, and vanishes for an entire decade…

Ten years have passed, and Steward’s health has been in continual decline. His body was severely damaged from the plane crash and is succumbing to reality: death. He finally dies a happy man and she is free to pursue Jay. But will he even want her? Is he now married to someone else? Isn’t she visually too old, no longer youthfully desirable?

Well, Harry Grant and Carl Cotton drag her out from retirement and inform her that they have just the right position in a proposed play for her to fill. Arriving at Harry’s home, they meet out on the balcony and discuss the proposal. She is mystified as the role sounds like her real life drama. Harry concludes that they have found the perfect man for the role and in walks Jay, salt-peppered hair, older, but still very much in love with Andrea Ellis after all these years … THE END.

A very pleasant romance story, delightfully written by N. Wesley Firth. I confess that I was surprised he would attach his daughter’s name to such a work, given her young age at the time. Sadly, she passed away some years back, and never had the chance to read any of the works appearing under her name, nor under her mother’s name.

NOTES: Steward Tracy clearly is clearly supposed to resonate with readers as being Hollywood actor Spencer Tracy. Harry Grant came across to me as actor Cary Grant, as I couldn’t think of a producer with a similar name. Not sure who Andrea Ellis is supposed to portray. Nor certain who Carl Cotton or Jay Niles would be. Anyone have ideas?