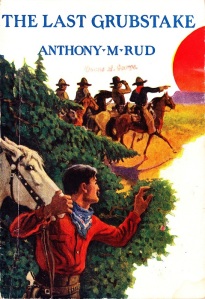 Bizarrely enough, for an author of some renown backing in the pulp community, his Wiki stub, a site I generally deplore, is sorely and embarrassingly lacking and appears to have been constructed on the fly by an inept hack. My one juvenile slander against the stub aside, the Rud novelette was a quirky, fun romp through what purports to be a crossover between the waning years of the old-west and modern times when men just don’t go around slinging lead around.

But, Uncle Herb is a dire holdout in favor of the old ways, and living as a hermit, down on his luck, and dirt poor, he starves himself for a week to save up enough of his own food for the visiting nephew, Corey.

Corey soon discovers on the sly that his proud uncle is destitute, and while in town, acquires a good horse for Herb, etc. Corey then embarks on a vacation with some other college-aged lads into the wilderness regions.

Meanwhile, banker’s son Bart is in a tight place. Carl Hertl comes to town to cash a cheque only to find that no such person exists. It is countersigned by Bart, whom has been gambling and losing thousands of dollars to Hertl. Resigned to fate, Bart arranges for Uncle Herb, whom has ridden into town, to take a delivery post with the bank, and assigns him to deliver tens of thousands of dollars, quietly, upon horseback! The plot is ridiculous, but Herb is old-fashioned and thinks nothing of it.

Hertl clocks the old man and keeps him locked up at his place. When Bart learns that the old man is not dead, he is beside himself. But, Hertl assures him that Herb is loopy, as Herb has been rambling for days in the basement about some lost gold that he’s been chasing for decades. Hertl dumps the old man in the middle of nowhere and lets him ride away, befuddled.

The law believes Uncle Herb has stolen the loot, since he vanished. Further, the law knows that Corey had paid him a visit, and they arrest him. However, Bart’s father, a long-time friend of Herb, realizes that the family is decent and pays bail. Moreover, he assigns, at the sheriff’s disgust and disbelief, the young man to track down Herb and prove their innocence!

Corey is no slacker in the brains department and begins putting pieces of the puzzle rapidly together, and things begin to shake apart for Bart, whom his father assigns to keep Corey company and assist in every way possible. The irony is palpable.

Hertl then rides into town, and announces that he spotted Uncle Herb up in the wilderness and followed him a ways. He informs Corey, in order to lead Corey out to Herb. Then he can wipe out both family-members, and make a clean getaway. But, his plan goes awry when Corey insists on informing Bart’s father, whom digs up an antiquated firearm and tags along.

The three drive out and arrive where Hertl claims to have last seen Herb. Traversing the wilderness, they stumble across tracks, and canned food, then espy the singing Herb, whom, with further irony, has stumbled across the lost gold lode! Old and addled as he may appear to be, he spots the shadows approaching and Hertl shoots him down, but Hertl bites the bullet himself.

To worsen matters, Bart followed THEM from another vehicle, at a distance. From a range off, he plans to put bullets in all concerned, when he is walloped from behind by the sheriff, whom tailed all of them. The sheriff arrests Bart and proclaims that he is going to arrest all concerned, but Bart’s father, learning of his son’s betrayal, is disgusted, disowns the young man and tells Bart that he must face the music and go to jail.

Herb ends up dying and Corey goes on to inherit the gold.